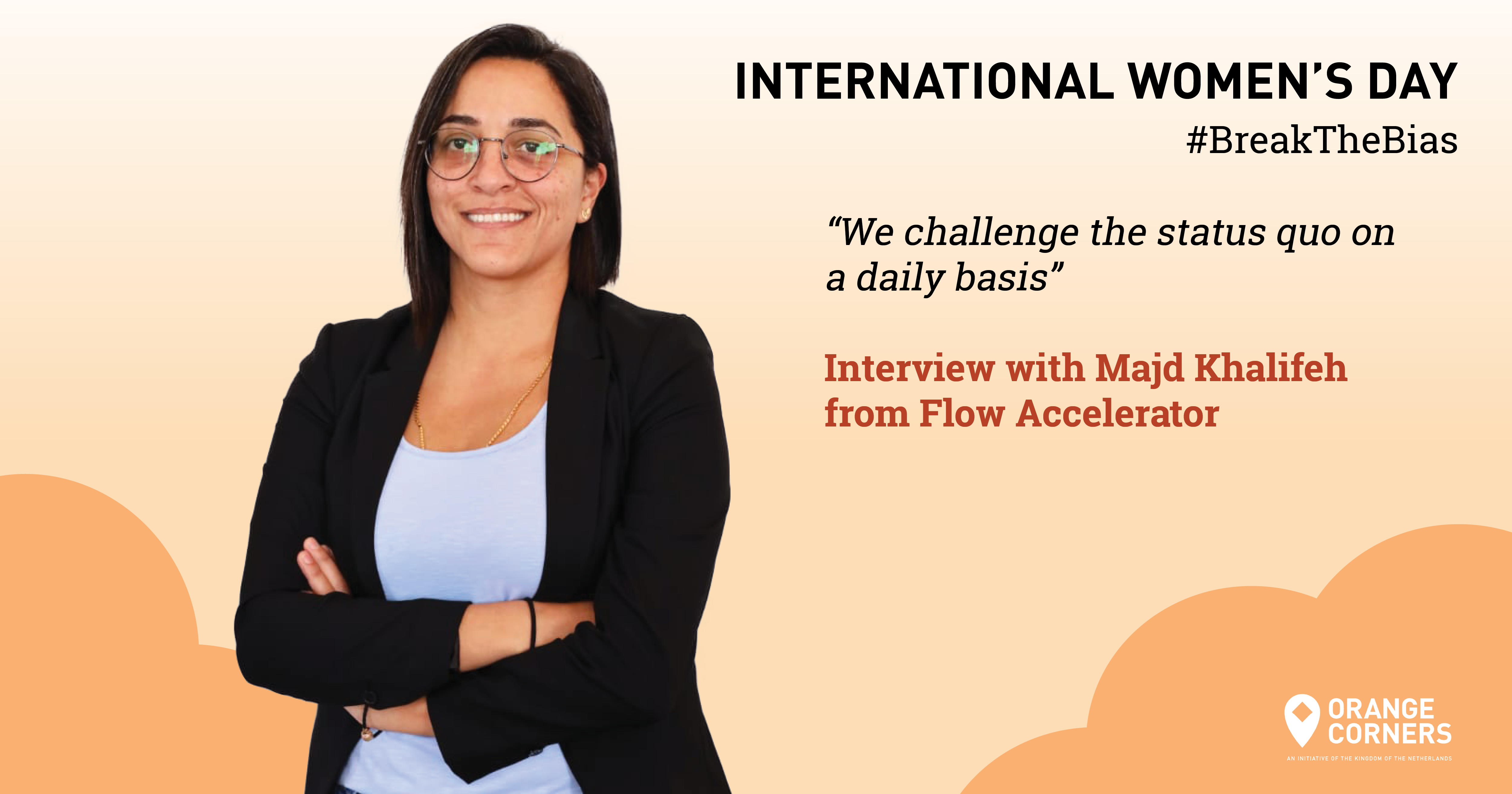 In the wake of International Women’s Day (IWD), OCHQ interviewed the CEO of Flow Accelerator Majd Khalifeh. Flow Accelerator is the implementing partner of Orange Corners Palestinian Territories and has recently celebrated it’s opening. For Majd, IWD should not be celebrated only on March 8. For her, the whole month of March is about “building resilience and breaking the bias”,  in line with this year’s IWD campaign theme.

“We challenge the status quo on a daily basis”

Why is it important for you to celebrate IWD?

“In Palestine, we do not only celebrate International Women’s Day on March 8. The whole month is all about breaking the bias for women and building resilience.

International Women’s Day is important for me. I come from a family that is strongly engaged in women’s empowerment. My mother was a female empowerment activist, so this was one of the core values in my upbringing. Even though my mother is not with us anymore, my siblings and I carry on her empowering mindset for the rest of our lives.

Nowadays, my older sister has taken over the role of my mother in terms of female empowerment. I feel surrounded by strong female achievers and thus I could say that my sister and my mother are my main role models. Often, the role models in your personal life could inspire you on a professional level as well. This is definitely the case in my own family.”

How was it back in the days, for your mother to be a female activist?

“We spent most of my childhood in Syria and Jordan, but after the Oslo Accords were signed  in 1993 my family decided to return to Palestine. My mother had been active as a female empowerment activist during the previous decades, which was extremely rare in the 70s and 80s. Once back in Palestine she became the deputy of the General Union of Palestinian Women, which is, I would say the highest institution for women’s rights. She established several organisations to assist and empower women in self-employment through the use of their own skillset.

What we are doing at Flow Accelerator is similar to what my mother envisioned. However, our community building is focused on motivated and inspiring entrepreneurs. We  provide female entrepreneurs with a support system by creating groups with like-minded peers,  so that they, as a group, can expand their network and improve their skills. We make sure they feel supported as they try to overcome insecurities, biases and/or barriers.”

How does your perspective on female empowerment creates an inclusive and supportive work environment at Flow?

“I believe that my personal values are partially incorporated in the Flow Accelerator “DNA”. I am innately inclined to empower females every day. Our team consists of six team members of which four are women. Of course, women are not the only agents of change in the gender equity debate. So we are lucky enough to have two great men working with us, both eager to succeed alongside us. I am thankful to say that the individual team members all look in the same direction: We see each other as equals and treat all entrepreneurs, females, males or other, in the same way.”

How was it to “break the biases” when you first co-founded Flow Accelerator?

“When we founded Flow Accelerator four years ago, entrepreneurship was still an untapped sector in Palestine. We formed great partnerships and launched unique programmes. The question in the ecosystem repeatedly was: “How did she do that?” This assumed that we did something unethical. Sometimes, that was frustrating. Creating partnerships was a step forward for us, but these kind of questions pushed us a step back again. We are high-achievers and don’t do business differently just because we are a team primarily composed of women.

We faced similar barriers whilst setting up the Orange Corners Palestine Territories programme. People would say: “What is she doing in order to achieve all of this?” I think people forget that I come from a business background and therefore my decisions are based on science and facts. I truly believe you achieve better results if you use an efficient and accurate working methodology, allowing for continuous improvement and better achievements.”

Do you have another example of how you overcame a bias yourself?

“In 2016, I became the very first accredited financial advisor in Palestine. This is a unique licence that qualifies the holder to pursue corporate investments and advisory.  When the media approached me after I received the accreditation, they asked me how it felt to be the first female ever to get this licence. I found the formulation of this question strange, because it assumed that there was already a man who received this qualification before me. I asked them: “Could you rephrase your question please? There is always a rule of first, and I was the first to rule.” It truly felt like I was a bystander. It didn’t feel quite right. Women always seem to come second, no matter what or how well they do.”

How do you manage to overcome biases at Flow Accelerator now?

“We try to remain focused. We learned a lot during the founding of OC Palestine Territories and during the pandemic and had a faster learning curve because of these hindrances we encountered. We iterated and repositioned ourselves, tried to stay flexible and find solutions. The results we achieve are only made possible because of the supportive and great team behind me.

As a team, we try to support and enhance male involvement as well as female empowerment. However, this does not preclude us from considering other factors. Cooperation and communication are the first key performance indicators we look at. However, we also see that women have less confidence in their ability to succeed, particularly in the entrepreneurship ecosystem, due to a fear of failure and a lack of success stories. We try to ignite their confidence and create a stronger support system by hosting female entrepreneurship breakfast sessions. We hope this will help them to gain confidence and speak up.

Both men and women can claim equal rights, but women in Palestine need, generally speaking, a stronger and safe support system so that they can be heard and achieve more. Many men have also encouraged women’s best practices. They understand that involving women in the process yields better results in terms of start-up innovation. Sometimes, a man can empower a woman even more than I can!”

How does Flow Accelerator try to open the discussion on women empowerment, gender biases or discrimination within the programme?

“As I said before, I don’t believe many female entrepreneurs feel confident or safe enough to speak up to other entrepreneurs about the biases they face. However, if they are motivated enough, I would advise them that it is safe to reach out to me or any of our team members regarding frictions in the workplace. These discussions will only improve our programme and help to create greater achievements together.

The Orange Corners programme is a place to learn, grow, achieve greater results and find the right mentor. We always try to create new experiences and events for females, connect them to role models, generate more and more success stories to show that females have it in them. However, creating success stories for women should not only take place on IWD: It should take place every day of the year.”

What would your advice be for young female entrepreneurs in regard to breaking the bias?

“Change the stereotypes by setting a good example. When women are on board,  they truly can’t do anything but help and improve your company!”